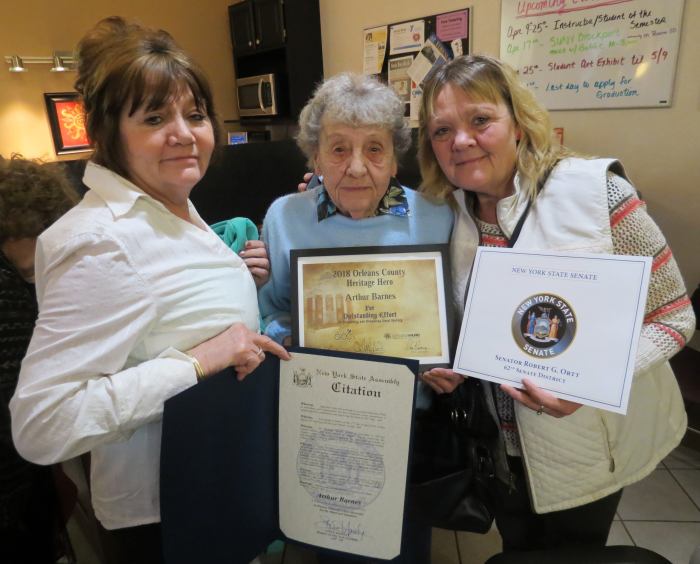 My mom and my sisters Edwina and Debbie.

Good evening. I extend my warmest greetings to everyone attending the Heritage Heroes Award Ceremony. I’m sorry I can’t be with you in person, but please know that I am most definitely with you in spirit and honored to be receiving this award. The honor is magnified by it being given at Genesee Community College where I have attended many classes and have had art exhibits.

I would like to thank the Heritage Heroes Award Executive Committee for selecting me for this Award. My interest in local history goes back many years and is reflected in much of my art.

Orleans County is rich in history and subject matter. I have often sung the praises of Orleans County. In my travels I am frequently asked where I am from. When I tell them New York they invariably think I am from New York City. I point out that the county I am from doesn’t even have a city in it. I usually add that I grew up near swamps. Given time, I speak of our southern border being a National Wildlife Refuge and drained swamps we call the Muck. I speak of the Erie Canal running through the center of our county and our northern border consisting of a lake so great that you can’t see the other side of it. West of Orleans County is land which saves us from the lake effect snow that cripples Buffalo. Because of this we have a warmer climate creating a fruit belt and our bountiful orchards of apples, cherries and pears. We are sitting in a sweet spot.

The history of our area is rich too. Before Columbus, the great Iroquois Confederacy ruled the area in harmony with the land. Ridge Road was an ancient native trail and in the 14th century there was a fort built by the Neuter Indians down the road from where I grew up in Shelby Center. Apparently having a fort and being neutral didn’t help, as they were wiped out by the Seneca in the 1600s.

The Revolutionary War, the War of 1812 and the French and Indian wars all were fought in this area. Citizens of Orleans County served in the Civil War and the Underground Railroad was actively helping freed people cross into Canada with the help of the Quakers. Perhaps my very own cobblestone, which was built as a Quaker Meeting House in 1841 assisted in some way.

People all over the world are familiar with the Erie Canal, which helped make New York State the Empire State and gave birth to Holley, Medina and Albion. The canal also brought skilled tradesman who knew how to build cobblestone buildings. The combination of these skills and the availability of the stones created an abundance of cobblestone buildings rare to the rest of our country. I am proud to not only own one but to know that I have saved it from an early demise and have kept it’s history alive.

As a man who loves history and appreciates scenic views I feel very fortunate to live here. In my travels I will continue to be a good ambassador and sing the praises of my beloved Orleans County. I thank you all.

One thought on “Heritage Heroes Award”