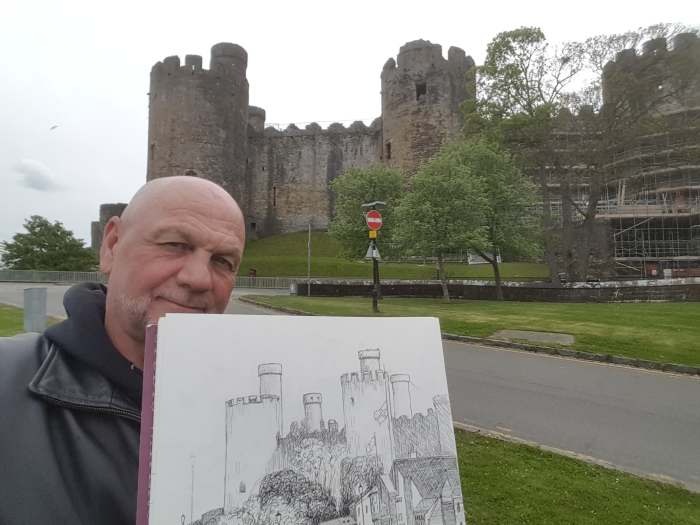 I left Gresford, Wales by bus and took it to Chester, England where I boarded a train to Conway.  I didn’t plan ahead. I just decided that morning to do it. Doing a sketch of Conway Castle was one of my goals as was visiting my family on Angelsey Island just north of Conway. I had been to Conway several times before but I wanted to spend some time there exploring the town. I knew I would not be able to settle down to draw with so much to see. To draw I would have to stop moving. But there was too much to see. I got off the train and walked the ancient streets taking pictures and checking out shops. I stopped in a quaint cafe called Illy Caffe for a cup of tea and to hook up to some Wifi. I had been trying to contact my cousin Andy who lived across the harbor in Deganwy with the hopes of spending the night there. If I was unsuccessful I was going to just take the train back to Gresford. The owner of the cafe was quite friendly and we had a pleasant conversation. I was browsing through a couple of history books on Conway that were interesting. That cafe became my base. I left the cafe and continued my walkabout looking for a good view to sketch the castle. It was problematic. Logistically, I was too close to it.  I took many pics looking for a good composition. The other option was to cross the bay and get more of the castle in view. It was getting late in the day.  I walked across the bay to get a different view and to see visit Andy. It was overcast and I hoped the next day would be better and that I would still be around. I made it to Andy’s. He wasn’t home but his boarder was. So I did get to spend the night and stay another day. The morning found me walking around the bay back to Conway. It was windy and chilly. I headed back to Illy Caffe where the owner Hazm was happy to see me. He let me hang there as long as I liked and I started the layout of a drawing in pencil from one of my pics. When I had a decent composition I left the cafe and stood in the cold and sketched it in ink from life. I went back to the cafe to warm up and drink tea that Hazm wouldn’t charge me for. When I left the cafe I walked around exploring. At one point I realized I had lost my hat. I went back to the cafe to see if I left it there. It did. Hazm pointed to an older man sitting at a table and told me he was the man who wrote the books and introduced me to John B. Davies. We had a lively conversation and he gave me one of his books which he signed for me. I gave him a print of my Angelsey boat scene. I also gave one to Hazm who promised to hang it in the cafe. I checked the wifi and I heard from Andy who was back home. He agreed to pick me up and take me up north to see our family. The journey continued. Winging it worked out fine.