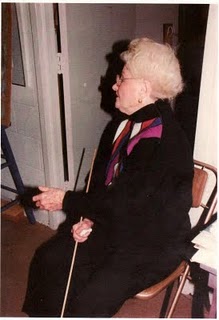 “I will tell you one thing that will wake you up. If you want to be an artist…nothing on earth can stop you.” Juanita Greene Parks.

I studied art on my own from youth. I trained myself as best as I could. But I was missing some basics. It all came together for me in 1983 when I met my teacher Juanita Greene Parks.  She was a huge inspiration for me. I only studied under for a year. That was all I needed. She was trained at the Chicago art Institute. She had 2 degrees and said she was going for a third one. But she said 90% of what she taught she learned from the artists she studied under and gave her no college credit. These artists included Reginald Marsh and Robert Brackman who in turn had studied under Robert Henri. This makes me a third generation Henri student. You can listen to some audio of her teachings here. Special thanks to Steve Pipes for posting some of the recordings I made of her back then. http://www.pipesplanet.com/jgp/jgp.html